First Lebanon Christmas event:  Normally the first report on Christmas opens with a photo of a room full of children. This year I want to focus first on the adults to convey the enormous task that Christmas for Refugees carries out each year. 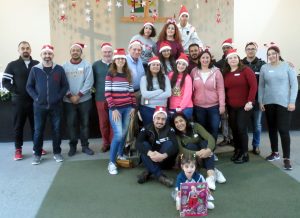 William J. Murray pictured with 19 of the 22 volunteers at the first Lebanon Christmas event for 2018.

In the photo at right I am standing with nineteen of the twenty volunteers to help with the first Christmas event in Lebanon. The Christmas program, including a dinner and a gift, required this many adults for just 100 children. That is a ratio of one adult to five children.
Some were involved in transportation, others put on the puppet show, and still others were concerned with the music. The meals had to be distributed, and the order and safety of the children had to be watched as well.

Keep that figure in mind … There were twenty -two adults needed for a program for 100 children. In all, the Christmas program for 2018 will serve nearly 10,000 children. For large groups such as we have in Jordan and Iraq, there is one adult standing on each side of every fifth row of seats to manage behavior and assist with snacks, drinks, coloring contests and fun games the children play. We have had up to two hundred volunteers for just one event in Iraq and about that same number for large events in Jordan. In the larger events, contract personnel such as caterers and bus drivers are not counted because they are hired.

Of the 100 children at the program pictured, 98 of them were Syrian and just two were Iraqi. Four women who came along to either watch or volunteer had recently accepted the Lord and were still wearing the traditional Islamic hijab head covering because of personal situations. This time, as in the past, I have tried not to include any of the new Christians in the photos because I do not want to cause them family or safety issues. 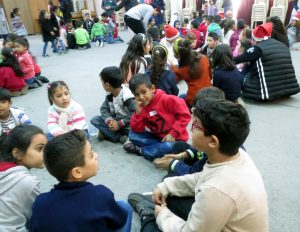 Toward the end of the program the chairs were moved out of the way and children sat in small groups, each with an adult leader, to learn more about the Lord

As I was leaving, two different women wearing hijabs requested to take photos of their children with me, along with the gifts they received for Christmas. It is always a blessing for me to see those who have recently accepted the Lord at the Christmas for Refugees events. This happens often in Lebanon and Iraq. However, photos of women wearing a hijab sometimes confuse American supporters of the Christmas program.

The first four events: There were four Christmas events for children the first week of December, and I was only able to attend two of those while in Lebanon. Of those four, two were held by brand new churches founded by Syrian refugees. The program the first three photos depict is in a church in Mansouri which is a district of Beirut where many refugees live.

The Christmas programs are directed differently in Lebanon than in other the nations because of the sheer number of events and the distances between them. This year there will be XX events for the children in Lebanon.

Rather than use one set program in Lebanon, each church develops a proposal for an event with the condition that the program must center on the true reason for the coming of Jesus Christ, and that our safety requirements are met. The proposals are evaluated, and recommendations made if needed. The church provides the bulk of the volunteers and our ministry furnishes the meals, gifts and other things that may be needed. 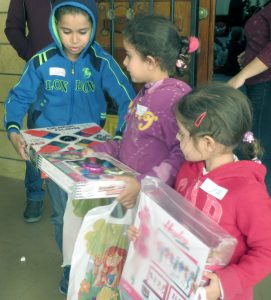 For the five years of the Christmas program in Lebanon, events have been held in various Protestant, evangelical churches and Orthodox churches and all have truly been centered on the Lord. In Jordan and Iraq, the much larger Christmas dinners and programs have also been held in Catholic facilities, but with our ministry partners doing the work. A couple of times, there were nuns who volunteered to help monitor child behavior, which did help.