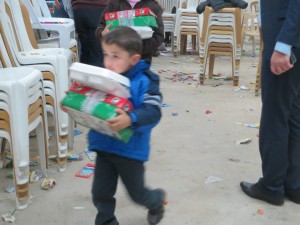 Tens of thousands of Christian families with children have escaped the attacks of radical Islamic groups in Iraq and Syria. Many thousands of Iraqi Christians are displaced and living in Kurdish areas of Iraq in temporary camps. Hundreds of thousands more have fled to Jordan and Lebanon. Mostly well-educated and middle class, they now live in basements or open fields, too fearful to enter United Nations run camps where they are further persecuted and brutalized.

Inside Iraq and in Jordan displaced Christians are ignored by the Islamic run charities. There are so many Christian refugee children that we cannot help all of them, but we can make one special day brighter for thousands of them by arranging a traditional Christmas day of fun and good food.

In 2013 and 2014, Christmas events that included hot meals were served to Christian refugee children in Jordan and Lebanon. In 2015 the program was expanded to Christian IDP’s (Internally Displaced Persons) in Iraq who fled the Islamic State as the city of Mosul and Christians villages nearby were overrun. Much of the Nineveh Plain was also stolen from Christian families who fled to the Kurdish areas in the northeast. In 2016 the number of children served will be increased.

Our mission is to bring traditional Christmas celebrations to the displaced and persecuted church. Our program serves refugees in Jordan, Lebanon and Iraq. As Christian militias, the Iraqi army and Kurdish forces work to free the Nineveh Plain from the Islamic State’s control, we are planning ways to expand our Christmas program to town and villages already liberated from ISIS, including Qaraqosh.

Christmas for Refugees is much more than one hot meal at Christmas. For a few hours on Christmas Day, Christian refugee children have a warm, bright place to stay and some relief from the difficult situations they face on a daily basis.

One of the coloring books that will be distributed to the children during the Christmas programs this year.

There are games to play and joyous Christmas songs and puppet shows about the birth of Jesus. Gospel themed coloring books and work books are supplied to the children and in some cases Arabic language picture Bibles. Each child takes home a gift box for themselves and their family so they can continue to learn about their Christian faith. Children are also provided “hygiene boxes” filled with soap, shampoo, toothbrushes and toothpaste and cleaning and dish detergent to take home to their families.

In 2016 The Christmas for Refugees program will invite as many as 6,000 children between the ages of six and fourteen to a day of hope in the celebration of the birth of our Lord and Savior.

Please join as a partner in bringing hope to Christian children being deprived of their childhood by a war being waged on them by the Islamic State, al-Qaeda and other armed Islamic groups. Help us reach out to help these frightened and suffering Christian children who were driven from their ancient homeland.