Christmas for Refugees 2017 in Nigeria, Lebanon and Jordan 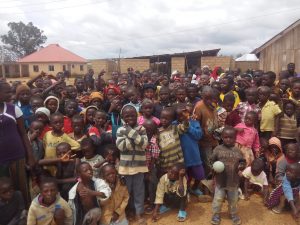 Nigeria: The first Christmas for Refugees event to be held in Nigeria was at an orphanage in the heart of the conflict zone. The orphanage is in the town of Miango in Plateau State just about 26 kilometers (16 miles) from Jos which has seen church bombings and the massacre of Christians. During the first week of December, four Christians who belonged to the same church were returning from a shopping trip when they were murdered by Muslim Fulani herdsmen. The Boko Harem, now affiliated with the Islamic State, also operates in this area. 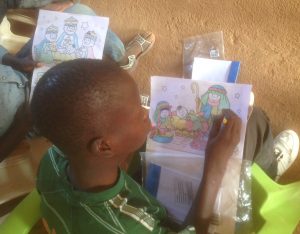 The orphanage we work with houses about 190 children. Almost all of them have lost both parents.

On my desk I have the statements of some of the children who saw their parents slaughtered in front of them. One example is David Solomon who wrote, “Fulani (Muslim) herdsman attacked my community and killed my father, machete my brother and elder sister and also shot me in the stomach but we all survived it.” Left with no home nor income, his mother was forced to place David, her youngest child, in the orphanage.

This past December, David and almost 200 children with similar stories were able to have a real Christmas celebration including a puppet show, songs and games. Because none were available in the Jos area, coloring books celebrating the birth of Jesus were carried from the United States — something we almost never do, as it is costly. But the coloring contests at the Christmas events are one of the most favorite activities for the children.

Each child received a hygiene kit of much needed items such as shampoos, soaps, toothpaste and other items. Every child also received a pair of shoes expected to last at least though the next school year. For most, those shoes will be the only pair they own.
Because of my schedule in the Middle East for Christmas, I was unable to visit the orphanage in Nigeria, but a representative of the ministry, a civil rights attorney who is a volunteer, flew to Nigeria to oversee the Christmas event and report back. I plan to travel to Nigeria in March to visit the orphanage and consult with other ministries in Nigeria.

Lebanon: There were a total of twelve Christmas celebrations held for Christian refugee children in Lebanon this year. On average there were 100 children at each event, but some had as few as 50 while others had as many as 200. Because refugee children are spread out all over Lebanon, events as large as we are able to hold in northern Iraq are just not possible.

Several of the Christmas celebrations were in the Beirut suburbs and that means they could be over an hour’s drive from each other. Some were in the far north such as Kfahabo. Two of the events for the children were held in the infamous Bekaa Valley where Lebanese soldiers have lost their lives fighting members of the Islamic State who crossed the border from Syria.

In Lebanon, my wife Nancy and I attended three of the twelve planned Christmas celebrations. The churches hosting the twelve celebrations for Christian refugee children are Baptist, Chaldean Catholic, Orthodox, Nazarene and non-denominational. Regardless of the denomination, the program and expenses are approved by us and by the service ministry that oversees the program for us in Lebanon.

At one of the celebrations I attended in Lebanon, all 200 children stayed in the auditorium for songs, games and presentation of a Nativity play. In churches with more space, the children were broken down into groups of ten so they could move from one activity to another. There were games such as ring toss and bouncing a ping-pong ball into a glass of water. There were also art stations to make Christmas ornaments and angel figurines.

In Lebanon each child received a meal and a toy, usually a board game that could be shared at home, or Gospel themed coloring and work books. The families received double thick blankets. These blankets were manufactured in Lebanon by a non-profit organization made up of Syrian refugees.

Each year at least one of the Christmas events in Jordan is located at a large Assyrian Church in Amman with a church hall underneath the main sanctuary that will accommodate hundreds of people. The children as well as many of the parents are bused in, which is costly. The Christian refugees in Jordan do not live in the official refugee camps out of fear of the many Sunni Muslim terrorists who take shelter in them. We cannot hold the 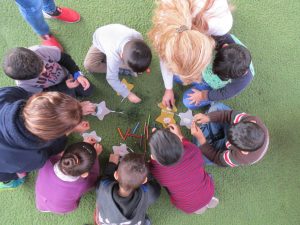 A small group of children make star ornaments as a project during a Christmas for Refugees event at a Nazarene Church in Lebanon. Christmas, 2017

celebrations inside refugee camps as we do in the Christian camps in Iraq, so expensive busing must be done.

I was saddened to learn that the Assyrian priest we had worked with for many years had passed away this summer. However, the new leadership is very cooperative. Although held in the Assyrian Church, the entire program is presented by our own team in Amman. The Gospel message is central to our programs, although there are games and singing and, of course, gifts. 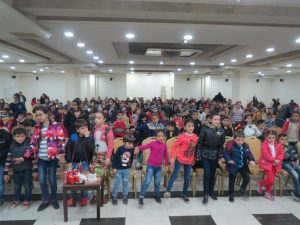 Another Christmas celebration for Iraqi Christian children was held in Madaba while my wife and I were in Jordan. Madaba is a town with a strong Christian tradition and it is the home of the very famous “Church of the Map.” The actual name is Saint George’s Church, but its nickname comes from its 6th-century mosaic floor depicting a map of the Middle East.

The church was constructed during Byzantine times. Sadly, most Americans do not know that the entire Levant, including what is now Jordan, Syria, and much of Israel were Christian areas before the invasion of Muslim Arab armies. (See Video of Madaba event here or at bottom)

The celebration in Madaba was in a recreation facility belonging to Saint George’s church, which is still an active Greek Orthodox church. While the event in Amman had nearly 300 children, the one in Madaba had just about 150. A little more open space allowed more physical activity for the children than in Amman. Just as in Amman, each child received a personal gift and a large heavy plastic bag of hygiene materials including soaps, shampoos, toothpaste, etc. 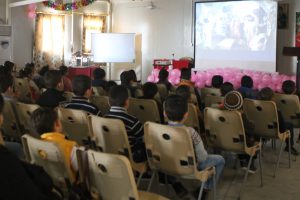 The Jesus Film was shown in Arabic at all five of the Christmas celebrations in Iraq this year. Christmas, 2017

Iraq: Up until the very last minute my plans were to travel to Iraq to visit with the displaced Christian children at the Christmas events of 2017. Sadly, as I departed for the Middle East on December 14th the Erbil, Iraq airport was still shut down because of a dispute between the Iraqi government and the Kurdish Regional Authority.

The dispute began when the Kurdish Regional Authority held a vote for independence against the will of the Iraqi Parliament, and then declared that Kurdistan would become an independent nation.

What was odd about the declaration was that every civil employee of the Kurdish Authority has their salary paid by the Iraqi government. Also, over 85% of all consumer goods in the Kurdish region come from Turkey, which clearly warned it would not tolerate a Kurdish state on its border. Within days the Kurdish region was totally isolated without the support the leaders had expected from the United States.

The dispute between Iraq and the Kurdish Authority also stopped most funds transfers from the United States to Kurdistan — except charities. Most banks would only release small amounts of funds to their depositors. Thankfully, because of its nature as a charity, our ministry partner in Erbil, Iraq could access the funds we had sent for the Christmas celebrations.

On Christmas Day 2016, not a single Christian child was in Qaraqosh. That year, I led a convoy of trucks with food and water from Erbil to Qaraqosh to help the Christian militia guarding the town. Not a single Christian family had returned because of the level of destruction and the unsanitary conditions. On the last day of our Christmas program for 2017 in Qaraqosh, there were 5,046 families but the number was unstable. Some try, but living in a burnt out home with no major appliances such as stoves or refrigerators can be difficult, and they leave again.

Everything in every Christian home in Qaraqosh was looted by the Islamic State. Every stick of furniture, the dishes, the linens, even the wall switches and electrical outlets were looted and taken to Turkey to sell for money to buy more guns. Homes containing generations of memories were wiped out and then burned or blown up. Let us be honest: the children and their families all suffer from some degree of Post-Traumatic Stress Disorder (PTSD). At the least the children lost their homes and their childhoods. At worst they saw their family members brutally murdered. We must help these children.

In the next newsletter, I will have a more detailed report on our program in Iraq, directly from our ministry partners there.