Christmas for Refugees in Syria!

Dramatic move for Christmas for Refugees program:  I cannot go into detail as to how we are going to help Christian children in Syria celebrate the Lord’s birth this year.  The important thing is that at least 1,000 displaced Syrian Christians will have a real Christmas this year if we can raise the needed funds.  With Syria added, the Christmas for Refugees program will help children and their families in five nations this year: Lebanon, Jordan, Iraq, Syria and Nigeria.  Please pray that we will be able to expand to Syria. 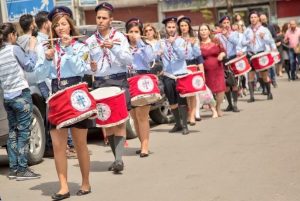 These are Syrian Scouts marching to celebrate Palm Sunday in Damascus, Syria this year. These girls would be whipped to death in Saudi Arabia for how they are dressed.

According to data from the United Nations Office for Coordination of Humanitarian Affairs, nearly 900,000 Syrians are expected to return to Syria in the next few months.  In 2017 more than 700,000 returned.  More than 200,000 have returned to Aleppo — the city that Western media said people would flee from if the Syrian government took it back from American supported “rebels.”  The opposite has happened.  As the secular government of Syria wins back territory from American and Saudi backed Sunni Muslim rebels, civilians are returning.

Bottom line:  The vast majority of the Syrian people did not want the strict Sharia law that was being imposed by the American and Saudi backed Sunni Muslim rebels. There are very few veiled women in government-controlled areas.

Syrian civilians are also returning to the areas near the Jordanian and Lebanese borders recently captured by the Syrian Army.  It is in that area the Christmas for Refugees program will operate if the program for Syria is fully funded.

Syrian Christians fled to Jordan and Lebanon when areas they lived in were attacked by the Islamic State (ISIS), al- Nusra (al-Qaeda’s name in Syria) and over one hundred different armed Sunni Muslim groups supported by Saudi Arabia and Western nations.  The CIA and Pentagon ran different programs supplying weapons and payments to Sunni factions — and on several occasions the CIA backed groups have fought the Pentagon backed troops.

Some of the CIA supported groups that have received heavy weapons, including TOW missiles, include: The Martyrs of Islam, Dawn of Islam Division, Islamic Freedom Brigade, Mujahideen of Horan Brigade, Partisans of the Islam Front, and Army of Mujahideen.  All of these groups were murderous Sunni Muslim thugs that persecuted Christians and Shia Muslims.

As these groups were defeated, Christians and Shia Muslims who had fled began to move back.  The Christians are moving back to destroyed and looted homes and churches, just as they have in Iraq’s Nineveh Plain.  The Christmas for Refugees program can help these Christian children celebrate the birth of our Lord this Christmas.