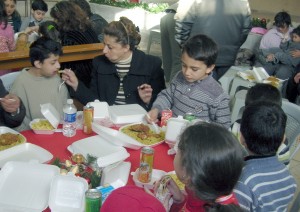 Since it is many months until Christmas, 2014, I don’t want to dwell too much on our planned Christmas dinners and relief efforts for Christian refugee children, but I do want to report this month on our preparations.

I hope to expand the program from the 1,000 children we had last year to at least 10,000 this year. Rather than plan a few large events in winter as we did last year, it seems it would be better to have many smaller groups of children, in churches all over Jordan and Lebanon. I am also working to hold some of the dinners directly in Christian towns in Syria such as in Jaramana. (Read about the first dinner here.)

The support base of the Religious Freedom Coalition is not large enough to finance the entire project. While we could manage 10,000 meals, the biggest cost by far is for the “joy bags” the  children take home to their families. Each bag contains food stuffs such as rice, beans, pasta, powdered milk and dates to last for several meals.

To finance the project and to bring a better awareness of the dire situation of the refugees, I must reach more people. Over the past thirty years the Religious Freedom Coalition has collected hundreds of thousands of petitions and other contacts. We have huge data bases of social conservatives who currently do not donate to our projects and do not receive newsletters.

Beginning this month we will mail a very lengthy letter explaining the plight of Christian families in Syria and what the Christmas for Refugees program will do to help them. During April we will mail 50,000 letters and costs permitting, 50,000 each month through November. In all we plan to mail 400,000 letters. If projections are correct, we will get about 8,000 financial supporters of the program from these mailings. These additional supporters will allow Christmas for Refugees to expand its outreach to Christian refugees in Lebanon as well as Jordan. Eventually we hope to expand the program to Christians inside Syria who have been forced to flee there homes there as well.

Most of those prospective supporters receiving my letter have previously offered moral support or signed petitions to Congress to help persecuted Christians, but have never actually donated funds. PLEASE … be in prayer that those receiving the letters will be touched by the need and support the Christmas for Refugees program for 2014. 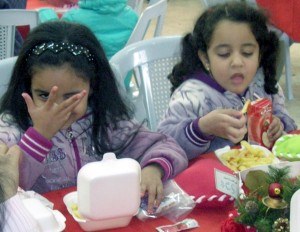 Most of those receiving the letters will probably not respond financially, but there is still an upside. Those that do not help financially will still be educated about the continued persecution of Christians not only in Syria but in the entire Middle East. This is as much an educational project as it is a fund raising project.

During April and May I have a special request. Please help finance these mailings to perspective supporters of the Christmas for Refugees program. The letters will be mailed at a non-profit rate rather than first class and the printing service is giving us special rates. If you help with the mailing costs we can reach more people and add more support for the Christmas project in the future.

As part of the Christmas program we have revamped our site at Christmas4Refugees.org and it now has a powerful new YouTube video about the program that features the kids we served dinner to our first year of the program, I hope you will take the time to visit the site.

Please help our Christian refugee children this year! Give a one time or monthly commitment now.