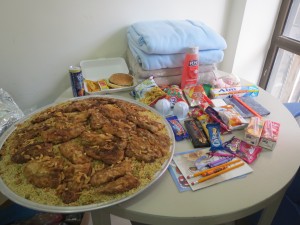 Adults were served fish and rice on plates from large platter. Children received hamburger and fries in single serving trays. The contents of the children’s gift bag and work books is shown with blankets.

The American team consists of William Murray, Nancy Murray and Robert Armstrong. On December 16th and 17th the team was in Jordan; however, William and Nancy Murray returned to Lebanon on the 18th to monitor additional events for the children there. The entire team will reunite just before Christmas in Iraq.

Puppet shows a big hit: This year the program specified that a puppet show be included in all events if possible. The puppet shows explain to the refugee children the real meaning of Christmas and the purpose of the coming of the Lord. The intent of the shows is to reinforce the spiritual meaning of Christmas for children who have been torn from their homes. Most Iraqi and Syrian Christian families in those nations were middle class and now find themselves in extreme poverty, living for the most part off of charity. 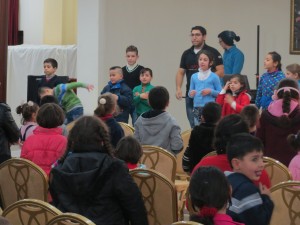 In Jordan there was singing of children’s Christmas songs and Christmas carols before the puppet shows. After the puppet show children were asked questions about the show and its meaning. Most raised their hands to proudly answer that Jesus came as the Savior of mankind.

In the larger rooms that were obtained for the Christmas events such as big Orthodox churches the parents sat in rows of chairs in the back while the children were all in front to participate better. It was obvious that the children, at least for a few hours, were able to forget about their present state, which is a major goal of the entire Christmas for Refugees program. The Christmas program is a break for the children from the horror of their current state of poverty, being away from all that is familiar to them.

The meals in Jordan were somewhat different because of some 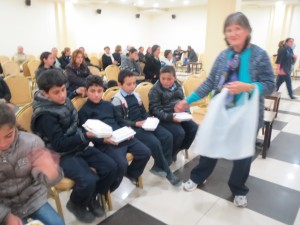 traditions. Most of the families served were Orthodox from Iraq and the adults were fasting from meat. Rice and fish was served to the parents who came with the children, and they carried home the very large packages for food for Christmas. The children were given a special treat of a hamburger and fries which is something rather special and which parents and organizers locally had wanted as a treat.

After the meal the children started cheering for the appearance of Bābā Nuwayl (بَابَا نُوِيل) to bring them the gifts they were told they would receive. Bābā Nuwayl (بَابَا نُوِيل) is of course Santa Claus and he is a big part of Christian celebrations of Christmas in the Middle East. Santa did appear, although to much laughter at one event when his beard fell off revealing a youth minister. Each child received a plastic bag containing small toys, chips, cakes and some sweet candies.  When the families left, the children also received Christian themed work and coloring books. 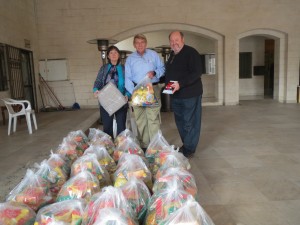 Nancy Murray, William Murray and Bob Armstrong with large bags of food staples to be distributed to the families of the children attending

Each family also received a large pack of food staples including cooking oil, powdered milk, rice, flour and canned and boxed goods. In addition, each family received a blanket.

A big thanks from all the Christian refugee families goes to those who donated their time and dollars to make a Christmas possible for their children.

Please donate now to expand the program for 2016. You can really help Christmas for refugees make a difference in the lives of refugee children and not just at Christmas.

3 Comments On “More Christmas events held in Jordan and Lebanon”