On August 6, 2014, the Islamic State overran Iraq’s largest Christian city, the city of Qaraqosh. The advance forced thousands of Christians to leave the city after it had been the target of jihadist attacks for weeks.

One month before, the Islamic State took over the city of Mosul and many Christian residents from Mosul fled to Qaraqosh after ISIS issued an ultimatum for Christians living there: convert to Islam, pay a fine or face “death by the sword.”

Qaraqosh, a historic Assyrian town, was once home to 50,000 people. Once year after ISIS captured the city, there were no Christians left living there. The churches in the town were used “as prisons for torture” and any Christians left in the town were “forced to convert to Islam. ISIS have been breaking al the crosses and statues of Mary,” according to Abu Aasi, a man who fled Baghdad.

In March of 2015, a 10-year-old girl from the city of Qaraqosh, named Myriam, said she would ask God to forgive those who threatened her family’s life. 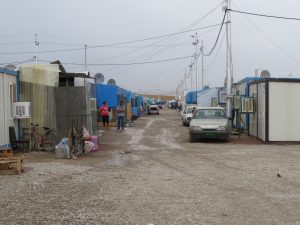 Many Christians and other religious minorities who left Qaraqosh, Mosul and the Nineveh Plain in 2014 fled to neighboring countries including Jordan and Lebanon. Many of these Christians were, and still are, too afraid to go to UN run refugee camps because they fear they will be targeted by Muslim refugees there. They risk death threats, attacks, beatings and women and young children risk being raped.

In late October 2016, the Iraqi Army, with help from the Kurdish Army and a Christian Militia known as the Nineveh Plains Protection Unit retook the cities of Qaraqosh, Bartella, and Karamless while on their way to retake the city of Mosul from the control of the Islamic State. On October 30, a handful of Christians, including members of the Nineveh Plain Protection Units, the local Christian militia, came together in a burnt out church in Qaraqosh to celebrate the first mass in the town in over two years.

For over a decade, the Religious Freedom Coalition has remained steadfast in supporting aid programs to Christian refugees that were forced to flee their homes in Iraq. The programs we supported included assisting a medical clinic in Amman, Jordan that helped Iraqi Christian refugees. Chairman William J. Murry has done his best to make sure that every dollar donated counted, that there was no waste and that 100% of the aid went to Christians.

In 2013, the Religious Freedom Coalition started the Christmas for Refugees program. The mission of the Christmas program was to bring spiritual help, as well as food and medicine, to Christian refugee families who were ignored by Islamic-led charities.

Many of the children who attend the Christmas program have fathers and brothers who have been murdered in cold blood by jihadists from al-Nusra and the Islamic State. In some cases, they have been forced to watch the deaths.

These children grew up in middle and upper-middle class families, living in nice homes. Their parents had good jobs and many of the children attended private Christian schools. Now these children are living day-to-day in the basements of abandoned buildings. 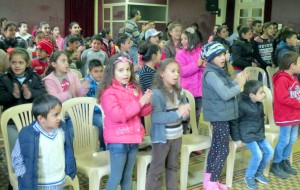 At this Christmas event north of Beirut one of the youngest girls began to cry when it was time to leave. At one point all chairs were stacked for the children to be able to play various organized games.

Christmas events including hot meals were served to Christian refugee children in Jordan, Iraq and Lebanon. Christmas for Refugees is much more than one hot meal at Christmas. The hours-long program includes Gospel themed plays and puppet shows along with games and traditional Christmas songs. Each child takes home a gift box for their family, which includes essential items like toothbrushes, toothpaste, hand soap, tissues, sponges, feminine hygiene items as well as dish and laundry soaps.

In 2016, the Christmas for Refugees program will invite as many as 6,000 children between the ages of six and fourteen to come and celebrate the birth of Christ.

In 2015, the largest Christmas party for the children in Iraq, alone, was 300 children. This year, the Christmas parties in Iraq are being moved to a conference hall in Erbil, Iraq and over 500 children and 70 volunteers will be bused to the location at each program. Meals are prepared by a catering company because of how large these events are. Programs will also be held in Lebanon and Jordan as they were the year before. The Christmas for Refugees program provides a general outline as to how funds should be used in each country; however, the guidelines are not strict, since national cultures differ.

[su_button url=”https://christmasforrefugees.org/c4r2/”]Donate today to help refugee children have a real Christmas this year[/su_button]

Religious Freedom Coalition Chairman, William J. Murray is once again traveling to the Middle East to ensure these programs run smoothly. He just received word that the program will be expanded to include Qaraqosh this year!

Christmas for Refugees is more than one hot meal at Christmas. For a few hours on Christmas Day, Christian refugee children have a warm, bright place to stay and some relief from the difficult situations they face on a daily basis.