Christian history being erased – The monastery of St Sergius is dedicated to a Roman officer (Sergius) who was martyred in the fourth century, for refusing to renounce his Christian faith. Its construction likely predates the Council of Nicea (325 AD) as it has a round altar, which was prohibited at the Council. The very size of the monastery indicates the size and power of Christianity inside of Syria before the country fell to invading Islamic armies in the seventh century. 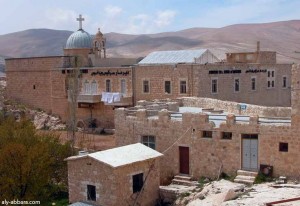 Upper portion of St. Sergius is shown here. Massive walls overlook the valley below. The complex was taken over by Obama supported Islamic rebels last year.

For a major part of the past year, it was occupied by Islamist Syrian rebels associated with al-Qaeda who took advantage of its commanding position over Maaloula to help keep their grip on this Christian village. During the occupation of the village by the Saudi and U.S. supported rebels, strict Sharia law was enforced. Those Christians who were not able to flee were treated as slaves. Several Christian men were beheaded, and many of the women were forced into “temporary” marriages with multiple Islamic fighters.

The village is a key location on the main road from Damascus to Homs, and rebel forces used it as a transfer point to move arms supplied by Saudi Arabia and the United States deeper into Syria. For many months the Syrian army attempted to take back Maaloula but they were unsuccessful until April.

The monastery, built of stone during the fourth century, was damaged in battles but still stands. Unfortunately the inside of the buildings were looted and defiled by the radical Islamist fighters. The church had contained many hand written Bibles and other church documents dating back more than 1,500 years. The Islamic fighters looted religious objects of gold and silver and burned tons of ancient documents.

One UK newspaper reported that one of the soldiers retaking the village was a young man by the name of Samir who said he had been born in Maaloula, and joined the army to defend his village, the ancient religious center. He said it “will not change hands again because most of the young men in the village have joined the military.” 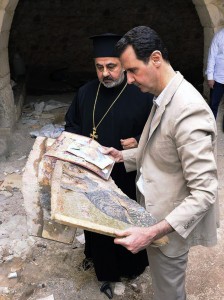 In this photo released by the Syrian official news agency SANA, Syrian President Bashar Assad, right, holds a broken religious mosaic during his visit to the Christian village of Maaloula on April, 20, 2014.

More and more Christians who had tried to stay out of the war from the beginning are joining the Syrian Army in hopes of saving the secular society where they have been allowed to practice their faith. The three years of war crimes against Christians by even the so-called “moderate” Free Syrian Army have convinced them that the  rebels will afford them no freedom to practice their faith if they come to power.

Various Eastern Orthodox and Catholic relief agencies have worked to alleviate some of the suffering of Christians as has the secular government of Syria, but still tens of thousands have been forced to flee villages that their ancestors have lived in literally from the days the Apostle Paul stood on the same ground. Sadly the churches of Europe and North America have largely ignored this disaster occurring in the land evangelized by Paul, Peter, John and Timothy.

On April 20th, Syria’s President Bashar Assad toured the destroyed monastery and several other churches with Syrian Orthodox Christian officials. President Barack Obama and many other Western leaders blame Assad for the current war, saying that his persecution of one Islamic sect over the other is the cause of the violence. The main backer of the rebels in Syria is the royal family of Saudi Arabia. To date, the Saudi government – which claims it wants to install a democratic government in Syria – has donated over $3 billion to the rebel war effort.

Regardless of who is at fault for beginning and sustaining the horrid war in Syria that has killed over 100,000 and displaced more than two million, it is the Christian community that has suffered the worst. Islamist fighters have arrived from all over the world to fight jihad against the secular government of Syria. Many of the fiercest fighters are from the UK and France. The Chechen fighters behead every Christian they come across. Several Muslims from the United States, including one woman, have died fighting jihad in Syria. Many focus on enslaving and killing the remaining Christians rather than fighting the Syrian Army. Entire families in some Christian villages have been murdered.

The Christmas for Refugees program is working to bring some hope and comfort to Christian Syrian children who have lost their homes and even lost fathers or mothers to the sword of the Islamist fighters. The goal of Christmas for Refugees is to supply not only food for the children and their families, but to help them have just one day a year of normalcy and even joy, in a time of chaos. That special day, revered by all Christians, is the day we celebrate the birth of our Lord and Savior Jesus Christ.

Please help a Christian refugee child have one day in a warm, safe place, with enough good food to eat, songs and Christian celebration, while helping an entire family as well. Donate today.