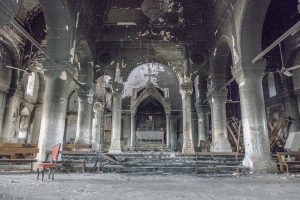 Inside the Church of the Immaculate Conception in Qaraqosh, Iraq, on 30 October 2016. The town of Qaraqosh was freed by NPU (Nineveh Plain Unit) after two years of ISIS occupation. (Photo by Joseph Galanakis/NurPhoto) Posted with permission

Qaraqosh and Bartella liberated: For over two years the Christians of Qaraqosh, which is Iraq’s largest Christian town, have had no place to worship. The Islamic State (ISIS) captured Mosul, Iraq in June 2014. With this huge city under its control, the Islamic State quickly moved on the surrounding Christian towns and villages of the Nineveh Plain.

The majority of what is left of Iraq’s Christians were living in the Nineveh Plain, having been forced to flee Baghdad and other cities in the south of Iraq.

In August of 2014 Qaraqosh, the largest of the Christian towns was captured, forcing its 50,000 Christians to flee, mostly to the Erbil area where Christmas for Refugees programs are held.

The largest church, the Church of the Immaculate Conception, was desecrated and gutted. All Bibles and even baptismal records were destroyed. The steeple bell was stolen.

Syriac Catholics, who are Assyrians, have lived in these towns for 2,000 years. Many of their ancestors were led to faith in Jesus by some of his own Apostles. Today these Christians still speak Aramaic, the language used by our Lord.

Everything in Qaraqosh is damaged. Everything left behind by fleeing Christians was looted by the religious army that follows the strict teachings of Mohamed.

Most homes are still not liveable.  Sometime in the future the Christmas for Refugees program will be expanded to Qaraqosh, Bartella and other Christian towns which are being liberated. No families have as yet moved back to Qaraqosh and other towns because of a lack of services including power. The children of Qaraqosh who fled to Erbil will have a Christmas for Refugee event planned for them there sometoime before Christmas this year.