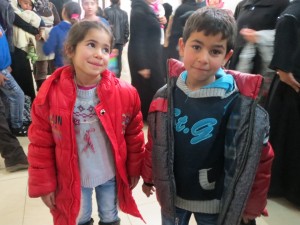 First Christmas events just a few days away: The first Christmas event in Lebanon is scheduled for December 13th. The dinner events for the children in Lebanon are scattered all over the country because the refugees are scattered. There are no United Nations refugee camps in Lebanon despite the fact that over 1.2 million Syrians alone are refugees there. Many camps are supported by the churches in that nation, which is still nearly 40% Christian. Most of our events there will be held in church facilities.

Because the children are spread out all over Lebanon, about 100 to 110 children are hosted at each event. The events are centrally managed from Beirut to make sure that all have the same elements such as a Gospel themed puppet show and proper meal service.

In Jordan the dinners are held in urban areas because most of the Christian refugees are located in the cities, principally Amman. In the Amman area we can manage up to 300 children at an event, in addition to some parents. In Iraq the situation is similar to Jordan, and there we have been able to increase the overall number of children. It now appears that we will be able to go past our goal of 4,000 children in 2015.

Christmas for Refugees staff are headed to Lebanon, Jordan and Iraq to supervise the programs that will last over a period of two weeks before and one week after Christmas. The program will be a real success this year and we can continue to build to serve more children in 2016.

With your help we can serve even more children in 2015 as well. It is not to late to donate and the need is endless. We can add several hundred more children and their families in Iraq if additional funds are received. Please donate today.